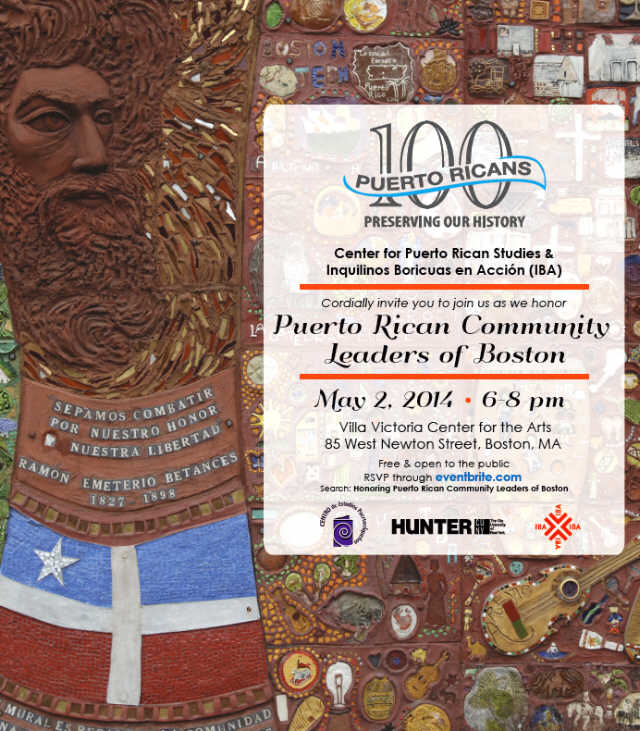 • Felix D. Arroyo was a city councilor (at large) in Boston. He also served on the Boston School Committee, becoming the first Latino to run citywide. He founded the Latino Democratic Committee, the first statewide Latino political organization in Massachusetts. He also served as the Latin American Affairs Director for U.S. Senator John Kerry and served in Mayor Raymond L. Flynn's cabinet. He is a candidate at Register of Probate and Family Court.

• Jovita Fontanez recently retired from the City of Boston’s Office of Business Development, where she worked as business manager. She continues to engage with nonprofits and political campaigns as a consultant. Fontanez has had a remarkable career including being the first woman/and Latina commissioner for the City of Boston’s Election Department; one of first Latina commissioner of the City’s Fair Housing Commission; and the first Latina elected to the Massachusetts Electoral College. Fontanez worked with Rick Quiroga, director/founder of Casa Esperanza, and was associate director and a founding member of the South End Community Health Center.

• Miguel Fuentes is a longtime small-business owner and Mission Hill community activist. His family business, Fuentes Market, participates in a variety of local activities, which have included those of Sociedad Latina, Mission Main and Mission Church. His commitment to his beloved Mission Hill community as a business owner has been about perseverance. His market has faced several devastating fires through the years, which he has attributed to retaliation for his stance against drugs. Fuentes attended Mass Bay Community College, where he studied business.

• Dr. Ernesto González is a professor of dermatology at Harvard Medical School. He was the first director of the Phototherapy Unit of the Massachusetts General Hospital and became a pioneer in the investigation and application of photochemotherapy (PUVA) to treat psoriasis. The Ernesto Gonzalez, M.D. Award for Outstanding Service to the Hispanic Community was established in 2005 by the Massachusetts General Hospital to honor González. It recognizes hospital employees every year for their contributions on behalf of the Hispanic community.

• José Massó, a native of Old San Juan, is a radio host who was inducted into the Massachusetts Broadcasters Hall of Fame on September 16, 2010 and has the distinction of being the first Puerto Rican/Latino to join such a renowned group of radio and television broadcasters from throughout state. He is director of community relations at Massport and host/producer of “¡Con Salsa!” on WBUR 90.9FM, Boston’s NPR news station, for 39 years. Masso’s career has included prominent and groundbreaking positions in education, communications, politics, entertainment, sports and philanthropy.

• Tony Molina, a former United States Marine, was the first Puerto Rican wounded in Vietnam and was awarded a Purple Heart medal. Molina has devoted a great deal of time and effort to causes and organizations that promote the welfare of Boston’s Puerto Rican community. Currently he serves as the first vice president of the Puerto Rican Veterans Monument Square Association.

• Felita Oyola (posthumously) was a singer who began her career performing jíbaro music and was dubbed as “the Queen of the Mapeyé.” As a singer, she became involved with various music genres. Ovola recorded with famous cuatro players Yomo Toro and Nieves Quintero and established the theatrical revue Estrellas Tropicales de Boston (Tropical Stars of Boston). This led to the foundation of a non-profit corporation whose purpose was to further Hispanic culture with an emphasis on traditional celebrations, theatrical arts, music and folk dances.

• Jaime Rodríguez is a Vietnam combat Army veteran having served from 1968-1970. He was an administrator for the Cardinal Cushing Hospital and also served as a team leader of the Federal Outreach Center in Boston designing outreach centers around the United States and Puerto Rico in the 1980s. He retired after 22 years as a Research Coordinator for the William Joiner Center for the Study of War and Social Consequences at the University of Massachusetts, Boston Campus. Currently he serves as president of the Puerto Rican Veterans Monument Square Association.

• Maria Sánchez retired after having served as the State of Massachusetts Probation Officer in Boston Juvenile Court for 20 years. She founded the Mission Main Tenants Task Force and has been a political activist in Mission Hill for many years. Her first community involvement was helping families who were illegally living in apartments in Mission Main Housing. On September 14, 2014, Mayor Thomas Menino, Mission Hill Neighborhood residents, local business owners and community leaders dedicated Maria Sanchez Square at the corner of Tremont and Gurney Streets.